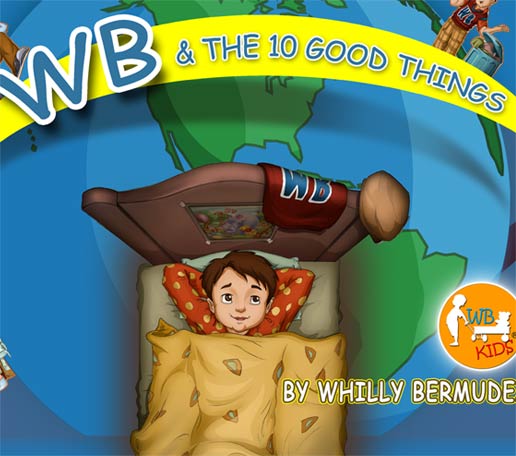 This illustrated book is for children ages 5-8. It relates the heartwarming story of WB, the protagonist who learns a valuable lesson: the best kind of life is one spent in recognition of the significance of others.

This illustrated book is for children ages 5-8. It relates the heartwarming story of WB, the protagonist who learns a valuable lesson: the best kind of life is one spent in recognition of the significance of others. But for WB there is something of a learning curve, and at the beginning of the story he is rather oblivious to those around him. It takes a trusted and kindly grandfather with a magical sweater to put him on the right track.

WB dons the sweater and discovers himself a superhero. Somehow the sweater has made him proud to be who he is, and this is a direct result of the attention and care that he bestows upon others. The boy must confront a hard truth when others at school make fun of him: This is a world in which many people have contempt for superheroes of compassion.

Unfazed by critics, WB comes to the aid of a girl being bullied, helps a boy with his backpack, and assists a child on crutches. But when he climbs a tree to rescue a cat, he tears his sweater and loses his superhero powers.

In the moving climax of the story, WB discovers that being a superhero had nothing whatever to do with the sweater, that he only has to believe in himself and act with love toward others. He finds himself reconciled to his enemies, and the book concludes on a resounding note of the power of the human spirit, the enormous possibilities inherent to simple acts of kindness, mercy, and forgiveness.

WB is a likeable Everyman (Everyboy) who, initially blind to the moral opportunities all about him (as well as the satisfaction of living a more ethically informed life), learns the most important lesson of all thanks to a sagacious grandfather’s magical sweater. Once WB puts the garment on, his eyes are opened to what had always been in plain sight but his habits of thought and behavior had permitted him from seeing.

The reader can’t help but feel something of his isolation in the world fall away as he comes to notice and truly experience the struggles of others. The sweater, just as his grandfather promised, has transformed him into a superhero–though, in a real sense, nothing like magic has been involved. Instead one boy has begun to live according to his highest, his noblest conception, his own human ideal. Embedded in the narrative is the insight that goes back to Plato, by which goodness, beauty and truth are ultimately the same.

What is right is to be done for its own sake, and this provides enormous satisfaction once the painful defenses of the self, have been dismantled and one discovers oneself in the other, finds the circuit of one’s experience completed in others. None of this is on the surface of the text, but it is inscribed in it nonetheless.

WB gets teased at school for having changed so suddenly, but the boy is undaunted. In the attempt to save a kitten from a tree, WB tears his sweater and his adversary is on hand to laugh. But the only thing that disturbs WB is that the sweater, once damaged, loses all power, and his stint as a superhero is over. Or so he thinks.

His grandfather explains that he doesn’t need the sweater to live with all the zest and purpose of a superhero. He then tells the boy of a family in which the breadwinner has just lost a job, and he proposes that they visit this family and do them a good turn. When they arrive at their destination and the door to the house opens, there stands the boy who had cruelly made fun of WB at school.

WB and his grandfather treat the family with kindness, compassion and generosity. And the next morning the formerly antagonistic boy is waiting for WB, to walk with him to school and become the faithful companion every superhero needs.

This is the moving, beautifully written story of the power of the human spirit when properly guided by an ideal. Given such state of affairs, anything is possible–even forgiveness. Don’t be surprised if this book transforms your child.